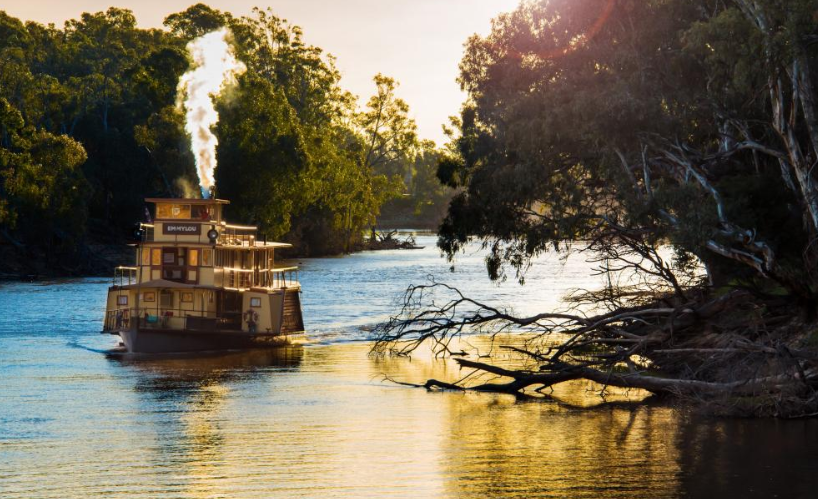 The Victorian city of Echuca and its twin town of Moama across the river in New South Wales sit proudly at the junction of the Mighty Murray.

Back in the mid-19th century paddle steamers ferrying supplies through to Australia’s interior made Echuca Australia’s busiest inland port. Today, the steamers still pass by, but it is for the tourists’ benefit that they do so. Happily, a section of the wharf has been preserved and the surrounding area, under the supervision of the ‘Port of Echuca’, enables visitors to view paddlesteamers, barges, historic buildings, and learn of the town’s fascinating past.

Echuca is located a couple of hundred kilometres north of Melbourne in an attractive pastoral and agricultural district. Given the importance of tourism to the local economy, there are some good museums, good shops, good restaurants and, just out of town, some excellent little wineries and some great places to stay. And, if you haven’t got the energy to venture even that far for a little tipple, the Echuca-Moama Wine Centre in town is open most days for wine tasting and sales.

But it’s the Murray itself which dominates life here. If you’ve brought your bikes along, it’s time to finally get them off the racks, and explore the excellent cycling tracks along the river banks. Or, just put on some comfortable shoes or boots and take a stroll through the parks and native forests along the river. It’s lovely.

In a town packed with tourist attractions, there are a couple of others that are worth pointing out, for their sheer uniqueness, if nothing else. As it proudly says in its marketing material, if you are a true Blue Aussie visiting Echuca you shouldn’t go past visiting the National Holden Motor Museum. Another Aussie icon, the beer can, is celebrated at the Great Aussie Beer Shed where more than 16,000 beer cans from around the world are featured, along with other brewery related items including beer tap tops and tap handles, trays, old wooden beer barrels, bottles and signs.

Just half an hour from Echuca-Moama lies the Barmah Forest and Wetlands, which is reputedly home to more than 200 species of birds and an abundance of other native wildlife. Here you will also find the world’s largest stand of red gums, many of which are more than 500 years old.

Magnificent waterways surround both Gunbower and Torrumbarry which can be found north-west of Echuca along the Murray Valley Highway. Torrumbarry is home to the Torrumbarry Weir and its interpretive centre, focusing on the history of the Murray River. Gunbower is renowned for its fishing and nomads travelling with a tinnie will relish the opportunity to explore Gunbower Creek. Gunbower Island which is the largest inland island in Australia and home to superb wetlands and the more-beautfulu than it sounds Kow Swamp is also well with a look.

But it is really the Might Murray itself which dominates the whole region and defines its identity. Just to explore some of its 2,600 kilometre length, as it meanders from the Great Dividing Range in the north east Victoria to its mouth at Goolwa in South Australia, is a treat for all who come here.

Visit the historic and revitalised port area; have a glass or two at the wine centre; visit the wetlands at Barmah; throw in a line at Gunbower; set up your campchair, put on a hat and soak up the magnificence and the mightiness of the Murray. There are some great caravan parks in the Echuca region to cater for their accommodation needs. Several of the parks boast river frontage and are also very convenient to all the town’s attractions.

However, if you’re looking for a more serene – and less costly – environment, then there are some top spots to pull up just out of town. Christies Beach camping area is situated on the banks of the Murray River very close to Echuca. It has toilets, picnic tables and fireplaces. Nearby Betts Beach camping area has no facilities … just bush and sandy beaches. Access to both is via Simmie Road.