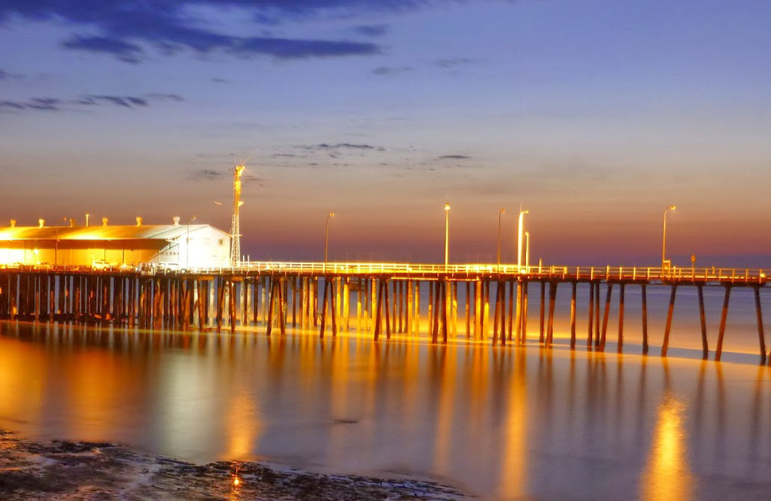 Derby is best known as the place at the beginning or the end of the Kimberley’s most iconic track … the Gibb River Road. The town is the perfect base from which to explore some of the more famous and easily accessible attractions. Both Windjana Gorge and Tunnel Creek can be reached along well maintained roads from the ‘Derby end’.

With a population of around 5,000, Derby is famed for its monster tides which peak at over 11 metres, and for its spectacular sunsets. People in the cracking dry season temperatures are always well represented among the campchair-sitting, ‘cold-one’-sipping crowds at the wharf as darkness descends at the end of each day.

Just a few kilometres out of town, is another Derby icon, the famed Boab prison tree. Believed to be 1,500 years old, the tree has a girth of nearly 15 metres, and a hollow sec­tion at its base was reput­edly once used as a prisoner lock-up. Continuing the penal theme, the town’s oldest build­ing is the Old Derby Gaol, which was constructed from galvanised iron and bars in the early 1900s. It hints at a fascinating history and a stroll around the Derby Pioneer Cemetery offers another eye-opening glimpse into just how tough life here once was. It is also well worth driving the ‘Pigeon’ Heritage Trail which traces the story of Aboriginal ‘outlaw’ Jandamarra, and tells of his violent run-ins with the authorities.

The Wharfinger’s House Mu­seum is another great place to learn about Derby’s past, and other attractions include the Royal Flying Doctor Base, the Botanical Gardens, and the School of the Air. Given the remoteness of its location, it is no surprise that Derby is very well serviced and can cater to most travellers’ needs.

There is a good hospital, a number of mechanics, a police station, and a tourist information centre. There are also restaurants, art galleries, shops and, of course, a number of caravan parks to accommodate visitors. There are also some ‘wilder’ camping alternatives along the Gibb River Road and at some cattle stations.

The large number of tourists drawn to Derby in the season has led to it hosting some superb festivals. Two of the biggest, both held annually in July, are the Mowanjum Fes­tival which celebrates many aspects of indigenous culture, and the week-long Boab Festival which includes a host of fun and richly entertaining activities.