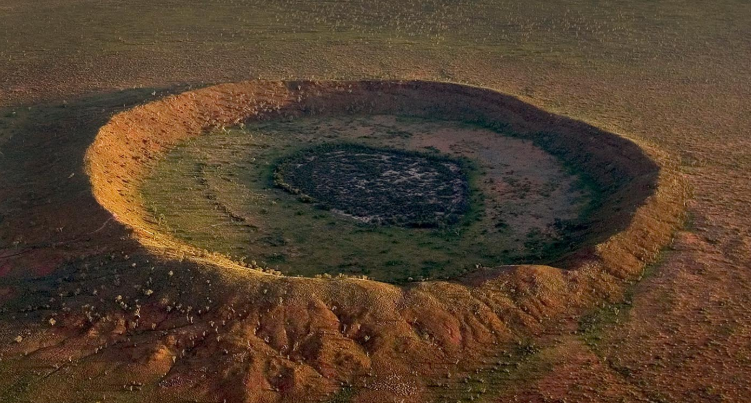 While a couple of recent hor­ror movies brought it to the wider public’s attention, it was actually a 1947 aerial survey that literally put Wolfe Creek Crater on the map.

After being initially spotted from the air, further explora­tion of the remote region of Western Australia’s Kimberley region revealed a spectacular meteorite crater measuring 850 metres across, and 60 me­tres from rim to crater floor.

The crater, believed to be the second largest in the world, was created about 300,000 years ago when an iron met­erorite weighing thousands of tonnes crashed to earth.

Despite the remoteness of its location about 145 kilometres south of Halls Creek, Wolfe Creek has long drawn ad­venturous grey nomads. The national park which surrounds the crater is on the edge of the Great Sandy Desert and is made up mostly of desert plains where spinifex grasses, hakeas and grevilleas grow.

The park can be accessed by the unsealed Tanami Road and parks authorities recommend caravans and motorhomes should have high clearance to make the trek. Conventional vehicles can only drive in dur­ing the dry season between May and October.

There is a large open free camping area near the crater with toilets but no water. To some, particularly those who have seen the two mov­ies inspired by the location, ‘surviving’ a night here is part of the thrill of a visit. In Wolf Creek and Wolf Creek 2, the film character Mick Taylor gave unsuspecting tourists a very unpleasant Outback experience.

Local tourism authorities, re­port however that rather than scaring backpackers and grey nomads away, the movies have sparked a renewed interest in the area. July, in particular, can get pretty busy.

Aside from the ‘spooky night’ thrill, most grey nomads come to the area to marvel at the crater itself. The 400-metre return walk to the top of the crater rim involves a steep, rocky climb but is well worth the effort.

Surprisingly perhaps, given the dry desert conditions, there are creatures such as red kanga­roos in the area and brown ringtail dragons can be spotted on the crater wall itself.

Bird watchers will enjoy look­ing out for nomadic species such as Honey eaters and the noisy Major Mitchell cocka­toos which feed on the seeds of the salt wattle growing on the crater floor.

Wolfe Creek Crater is a fan­tastic adventure but if you are planning a trip … don’t watch the movies before you go!