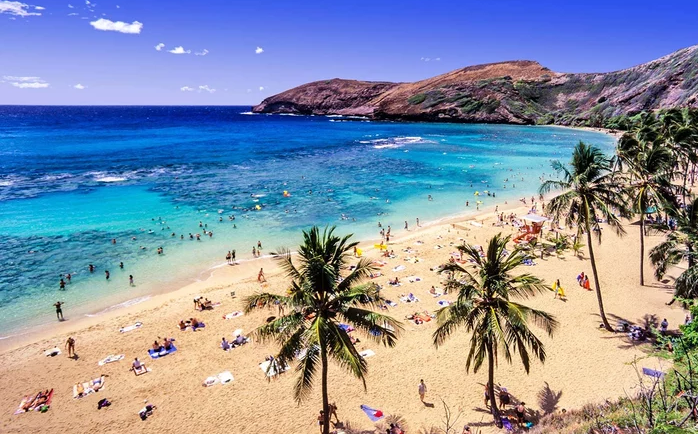 Hawaii, a U.S. state, is an isolated volcanic archipelago in the Central Pacific. Its islands are renowned for their rugged landscapes of cliffs, waterfalls, tropical foliage and beaches with gold, red, black and even green sands. Of the 6 main islands, Oahu has Hawaii’s biggest city and capital, Honolulu, home to crescent Waikiki Beach and Pearl Harbor’s WWII memorials. Dolphins? Pearl Harbor? Helicopter tour? So many choices, so little time. Hawaii offers an abundance of unforgettable experiences and great accommodation. It’s all here for you. The hard part is deciding how to spend your precious days in paradise. To help you get started, we’ve compiled a list of the top activities. Check it out and start planning your dream vacation.

Dolphin Tours
On Oahu, opportunities abound to swim with dolphins. Many popular tour companies choose to whisk participants away to a dream dolphin outing along the remote west shore of the island, known for its calm and clear, sparkling waters. Imagine actually getting in the water to swim with dolphins in the wild, and in some cases, even enjoy a delicious complimentary lunch on your return to the west side’s popular departure spot of Waianae Boat Harbor. Several companies offer private charter tour options, and for those seeking a bit more tame dolphin swim adventure, Sea Life Park, found on the east side of the island, offers the chance to swim with dolphins in Hawaii, with its tours including education about daily dolphin life as well as the chance to interact with them up close. Dolphin Quest, at the Kahala Hotel, offers dolphin encounters in a private lagoon setting.

Surfing
Legends dealing with surfing were contemporary with the earliest stories of ancient Hawaii. In about 400 A.D., a form of belly boarding on small wooden planks was introduced. Later, Tahitian explorers brought their tradition of riding waves with canoes. The ingenious Hawaiians merged the two techniques to create the sport of surfing. The ancient people closely associated surfing with the religious life of the day. Those born to high social rank engaged in sacred ceremonies when making plans to participate in surfing. It was customary after selecting a suitable tree to chop down and shape into a surfboard, to make an offering of native kumu (fish) at the base of the tree. Breadfruit and koa trees were the most commonly used to create surfboards, which were among the prized possessions of the ali’i (chiefs). Learning how to surf is a rewarding adventure. Enroll in a lesson, camp or clinic to start enjoying the “sport of Hawaiian kings”!

Snorkeling
Ready for some underwater sightseeing? Rent a mask and snorkel and swim out from shore. Hawaiʻi’s reefs are teeming with sea life and you’re sure to spot some colorful new friends. The two most popular spots to go snorkeling in Hawaiʻi are Hanauma Bay on Oʻahu and Molokini Crater off of Maui. But there are many more, less crowded spots with equally beautiful sights to see. Try Shark’s Cove on Oʻahu. (No, it’s not really sharkie.) Try Honolua Bay and Kāʻanapali Beach on Maui. Kauaʻi’s two best snorkeling spots are on the North Shore, Tunnels Beach and Keʻe Beach. However, the best time to go is during the summer. The winter months on Kauaʻi’s North Shore bring in massive waves. If this is the case, head over to Poʻipu Beach on the South Shore. On the Big Island, Kealakekua Bay is the favored snorkeling destination, and dolphins are often seen here.

The best conditions for snorkeling are calm seas and calm winds. The churning of the sea will stir up sand and sediment from the bottom and make visibility hard. See our tips on staying safe when snorkeling. Also, watch out for heavy rains. Snorkeling after heavy rainfall is not a good idea, as runoff will make the water cloudy. If this is the case for you, try another water sport like stand up paddle boarding.

Hawaii Beaches
If you come to Hawaii for the beaches, then you will not be disappointed. Hawaii beaches are among the most beautiful and exotic in the world. We have long stretches of soft white sand caressed by warm blue water. We also have black sand, green sand, and red sand beaches. We have beaches where waterfalls cascade into the ocean from sea cliffs, and beaches made of millions of tiny, round pebbles. We have calm beaches were babies like to play, and we have some of the mightiest waves the world has ever seen. When it comes to beaches, Hawaii has it all. Dr. Stephen Leatherman, aka Dr. Beach, agrees. Hawaiian beaches have topped Dr. Beach’s Top 10 Beaches in America lists multiple times. This is no small feat, as Dr. Beach has strict criteria. White sand. Clean water. Safety. No rip currents. No large shore break. Facilities. Parking. Lifeguards. Restrooms. No overcrowding. Warm water. These are the stringent guidelines that inform his choices, and Hawaii has risen to the top.

You could spend an entire two-week vacation in Waikīkī and never want for sights to see or things to do. The weather is near perfect. The waves are gentle and perfect for beginning surfers. The underwater world is teeming with rainbow colored sea life. Yes, you could make a vacation out of Waikīkī Beach, not to mention the surrounding attractions, world-class shopping and foodie joints.

White, Black, Green and Red Sand Beaches
There are, however, so many other sides of Hawaiʻi to see. Take for example Hawaiʻi’s colorful beaches. Hawaiʻi is the only place in the world where you can sink your toes into white, black, green and red sand. Hawaiʻi is also home to secluded beaches that can only be reached by swimming to shore. Intrigued?

Finding Hawaii’s Green Sand Beach
Let’s start our journey on the largest and southernmost island of the Hawaiian archipelago, the Big Island. This is where you can find Hawaiʻi’s green sand beach, Papakōlea. The journey to reach Papakōlea is not an easy one. You must either rent a four-wheel drive vehicle or walk a 5-mile round trip trail along the arid coast. The rewards are rich, however, as you let the green, volcanic olivine sand crystals fall through your fingers and cool off in the aqua waters. Papakōlea green sand beach is located near the Big Island’s South Point, or Ka Lae.

Beautiful Black Sand Beaches
Travel up the coast with the mountains on your left and the ocean on your right and you will reach Punaluʻu, the Big Island’s most popular black sand beach. Punaluʻu is easily accessible, and there is much to explore here including a lily pond. Keep an eye out for Hawaiian green sea turtles, as Punaluʻu is one of their favorite resting places.Punaluʻu might be the most popular black sand beach, but it is not the only one. Hilo is laden with black sand beaches. And further up the coast to the north of Hilo in the districts of Hāmākua and North Kohala, you will find valleys such as Waipiʻo and Pololū where rivers flow to meet the sea at expansive black sand beaches.

Award-Winning White Sand Beaches
Exotic green and black sand are sights to behold, indeed. However, the Big Island’s South Kohala and Kailua coasts have several stunningly beautiful white sand beaches. Kaunaʻoa Bay and Hapuna Beach are the best among them.

West Maui Beaches, Sensational Sand, and Surf
The island of Maui is our next stop. A visit to West Maui will reward you with most of the island’s best beaches such as Kāʻanapali, Kapalua, and DT Fleming Beach Park. Golden sands slope gently to inviting waters.
During the winter months, surfers flock to favorite surf spots such as Honolua Bay and Peʻahi, also known as Jaws. You can perch on the cliffs to watch the action or take the Road to Hana for a completely different experience.

Hana, Maui’s Red Sand Beach
The Road to Hana is long, winding, and scenic. This is the route to Hawaiʻi’s red sand beach, Kaihalulu. The trail to Kaihalulu has its risks and should be hiked with caution. A safer, and just as beautiful, an option is Waiʻanapanapa State Park. Here you can walk a black sand beach, explore sea caves and lava tubes, and take in the wonder of a blowhole.