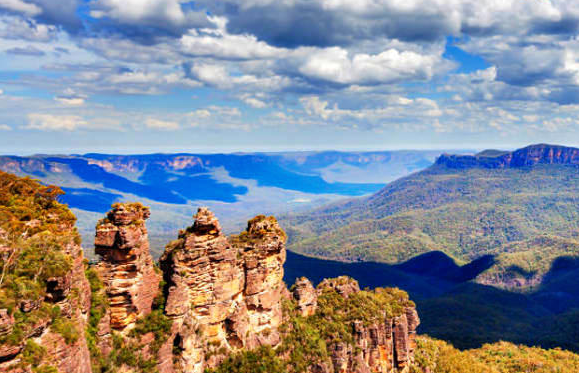 The Blue Mountains is one of the most visited areas in Australia … and it’s not hard to see why. Situated just an hour or so west of central Sydney, the region’s spectacular sandstone cliffs, deep gorges, stunning bushwalks, amazing wildflow­ers, varied wildlife, and historic towns have obvious appeal.

The Three Sisters is possibly the most famed of all Blue Mountains’ landmarks. Located at Echo Point near Katoomba, the unusual rock formation represents three sisters who, according to Aboriginal legend, were turned to stone. The area is awash with Aborigi­nal history … and with stun­ning scenery. The Grose Valley near Blackheath has some incredible cliff rock faces tow­ering hundreds of metres into the sky.

There are some fantastic lookouts around the major towns of Katoomba, Leura and Blackheath where you can check out the abundance of forests, waterfalls and rock formations for free … but many budget-busting adventurers are prepared to open their wallets to take a ride on the scenic skyway. Suspended 270 metres above ancient ravines, the skyway offers breathtaking views through the electro-glass cabin floor. Gulp!

The opera­tors assure us that, for the less adventurous, seating and solid flooring is also available! With 360° views, the 720-metre jour­ney provides amazing views of Katoomba Falls, the Three Sisters, and the entire Jamison Valley. Given that millions of people come to the Blue Mountains each year, it is not surprising to learn that there are other tour­ist ‘viewing’ options available, including the Scenic Cableway, the Scenic Walkway and the Scenic Railway.

The vast Blue Mountains National Park boasts more than 140km of trails and walking tracks, and the bushwalking is stunning … although all appro­priate safety precautions need to be followed.

Near the town of Oberon are the fabled Jenolan Caves, which are said to be Australia’s most impressive limestone caves. In­novative lighting helps to show off the underground rivers and stalactite formations to awe-inspiring effect. While nature will always the main attraction in the Blue Mountains, it should be noted that many of the surrounding towns also have great places to stay and are well worth a visit in their own right.

While there are some superb camping areas in the Blue Mountains National Park, most tend to be better suited to tenters or travellers with small trailers. There are, however, a number of excellent caravan parks in the towns just outside the park’s boundaries … and they are all still well within striking distance of paradise.