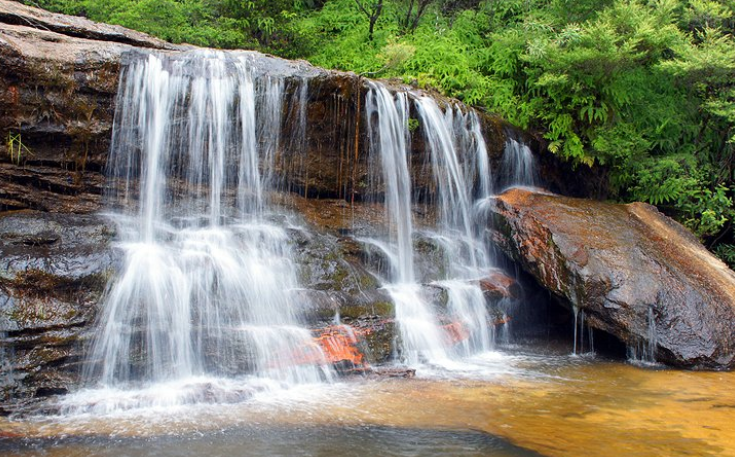 An alternative route to the Blue Mountains is via Bell’s Line of Road which starts at Richmond and takes you through to Mount Tomah and Bell, and across to Mount Victoria. This drive is extremely pleasant through the vast Blue Mountains National Park, a contrast to the main thoroughfare of the Great Western Highway.

If you are travelling from the outer west, follow the signs to Lithgow, then through to Hartley where you will enter the Blue Mountains via Victoria Pass taking you straight to the top at Mount Victoria. Possibly the most relaxing way to travel to the Blue Mountains is by Rail. Transport for NSW offers an extremely efficient service to the Blue Mountains. If you are flying into Sydney, there is a rail link taking passengers directly from Sydney Airport to Central Railway Station.

From Central you can Board an air-conditioned double decker Mountains train. The fast journey to the Mountains will most likely stop at Strathfield, Parramatta, Penrith, Emu Plains, and then all stations up the Blue Mountains. Most trains go through to Mount Victoria. Some even go as far as Lithgow. Trains generally run every hour and even more frequently during peak commuter times. Taxis are readily available from Blaxland, Springwood, Wentworth Falls, Leura and Katoomba Railway Stations.

Echo Point’s cliff-top viewing platform offers a magical prospect of the area’s most essential sight, a rocky trio called the Three Sisters. Warning: the point draws vast, serenity-spoiling tourist gaggles, their idling buses farting fumes into the mountain air – arrive early or late to avoid them. The surrounding parking is expensive, so park a few streets back and walk.

The Blue Mountains’ essential sight is a rocky trio called the Three Sisters. The story goes that the sisters were turned to stone by a sorcerer to protect them from the unwanted advances of three young men, but the sorcerer died before he could turn them back into humans. A 500m trail leads to more lookouts and a bridge across to the first Sister.

Far from other Blue Mountains attractions, the limestone Jenolan Caves is one of the most extensive, accessible and complex systems in the world – a vast network that’s still being explored. Several caves are open to the public, and tours cycle between them. There are various multi-tour packages and discounts.

Named Binoomea (Dark Places) by the Gundungurra tribe, the caves took shape 400 million years ago. White explorers first passed through in 1813 and the area was protected from 1866.
Signposted 4km from the highway in Blackheath, this Evan’s lookout presents a magnificent perspective of sandstone cliffs dropping to the valley and canyon below. It’s one of the most scenic of the Blue Mountains lookouts, and is also a trailhead for the majestic Grand Canyon bushwalk, perhaps the area’s best half-day excursion.

Surprisingly, the highest lookout in the Mountains is not at Echo Point or Govetts Leap, but west of the main range just south of Lithgow. At 1100 metres above sea level, Hassans Walls offers a mesmerising overview of the escarpment and the gorgeous Hartley Valley nestled at its feet. A recently constructed boardwalk provides easy access; take time to soak up the solitude, silence and ever-changing tapestry below. See lithgow-tourism.com/hassans

From the car park at Evans Lookout at Blackheath, descend 350 metres into a Jurassic world of rock overhangs, misty waterfalls and towering tree ferns on the Grand Canyon circuit. It’s at least five degrees cooler on the valley floor, so this winding, three-hour trail is a great place to beat the summer heat, despite the energy expended on the challenging ascent. This must rate as one of the most spectacular walks in the Mountains and definitely worth the heart-pumping effort. See nationalparks.nsw.gov.au/things-to-do/Walking-tracks/Grand-Canyon-track

Perched over the steeply plunging Grose Valley, Govetts Leap Lookout offers one of the most magnificent views in the Blue Mountains. It also tends to be less crowded than Echo Point, which looks out over the Three Sisters. The panorama extends across the main ridge, with its sandstone cliffs, to Bridal Veil Falls and the dense eucalyptus forest below. If you’re feeling energetic, you can descend into the valley from the lookout and enjoy the scenery along some of the region’s more challenging hikes. Govetts Leap is easily accessible by car. Along the same road, you’ll find the Blue Mountains Heritage Centre, with excellent exhibits and information on the area.

Cascading down three tiers of rock ledges, Wentworth Falls is one of the most beautiful waterfalls in the park. At the lip of the escarpment, Jamison Creek tumbles 297 meters over the upper and lower falls into a huge pool and gushes down a creek into the Valley of the Waters. Hikes in the area range from easy jaunts to challenging cliff-ledge trails, and you can view the falls from several lookouts. The falls can also be reached along the National Pass walking trail, but they are seasonal, so it’s best to check on local conditions before venturing out. In the nearby town of Wentworth Falls, you can stop by the Conservation Hut, an information center, restaurant, and launching point for several popular walking trails.

Katoomba is the largest town in the Blue Mountains and a major tourist hub. Along with the smaller neighboring towns of Wentworth and Leura, Katoomba rapidly developed in the second half of the 19th century from a coal-mining town into a popular holiday resort, easily accessible by rail from Sydney. Centrally situated in Blue Mountains National Park, the town is packed with galleries, boutiques, antique stores, cafés, second-hand bookstores, and excellent restaurants.

Australia’s highest botanic garden, the Blue Mountains Botanic Garden is the sister to the Royal Botanic Gardens in Sydney and a must-see for plant-lovers. The gardens are perched on a basalt peak, about 300 meters above sea level, with beautiful views of the Blue Mountains wilderness. The main theme of the garden is cool-climate plants, predominantly from the southern hemisphere. You can stroll among gardens grouped by geographical origin and compare and contrast how the plants have evolved across each region. Feature gardens include North American Woodland and the Heath and Heather Garden, and you can take a delightful walk through The Jungle, a 33-hectare tract of Blue Mountains rain forest. At the excellent World Heritage Exhibition Centre here, you can learn about the area’s ecosystems through interactive exhibits. Other things to do include guided tours of the gardens, shopping at the garden store, and relaxing at the restaurant and picnic areas.

One of the best ways to appreciate the beauty of this World Heritage wilderness is by exploring some of the park’s 140 kilometers of hiking and heritage trails. Many of the trails date from as early as 1825. One of the most popular trails is the historic National Pass. Carved into the edge of a cliff, the trail begins at Conservation Hut and enters the Valley of the Waters. Here, you can admire a set of graceful waterfalls before continuing on to the historic Grand Stairway, hand-built using picks and shovels more than a century ago. The walk ends at Wentworth Falls and Jamison Lookout, with awe-inspiring views.

Another popular trail is the Cliff Top walking track, which skirts the edge of the Grose Valley from Govetts Leap Lookout to Evans Lookout. Afterwards, you can refuel with a hot chocolate at Conservation Hut.
A great family hike is the Jellybean track – especially on a hot summer day. This easy trail descends into Glenbrook Gorge to picturesque Jellybean Pool, which is perfect for swimming with children. After a cool dip, you can enjoy a picnic on one of the sandy beaches. Also great for families, the Fairfax Heritage Track is suitable for wheelchairs and strollers and traces the banks of a hanging swamp through forests of scribbly gums. Before heading out, be sure to check local weather conditions, pack plenty of water, and don’t forget to bring a camera.

The Blue Mountains offers some great accommodation and places to stay from large homesteads to motels and bnb’s.