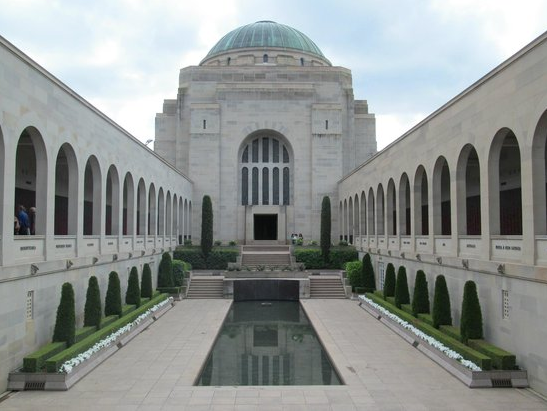 Trips into large cities are not normally associated with ‘Big Lap’ highlights, but few of the many people who make the pilgrimage to the Australi­an War Memorial in Canberra are not immensely moved by the experience.

The Memorial’s purpose is to commemorate the sacrifice of those who have served in Australia’s armed forces, and it does so with dignity and respect. Sitting on Anzac Pa­rade, which is itself lined with monuments acknowledging specific military campaigns or services, the domed Memorial is suitably imposing.

There is no charge for visiting the Memorial, which consists of a large commemorative area, a world-class museum, and a research center. Except for Christmas Day, it is open from 10am-5pm, and it always closes to the sound of the Last Post.

On special occasions such as ANZAC Day and Remem­brance Day, major services are held here and tens of thou­sands of people commonly gather in and around the Memorial to pay their respects and to remember those who have fallen.

The museum is filled with displays, stories, artifacts, and equipment from the various conflicts that Australia has fought in. The driving force behind the Memorial, histo­rian and war correspondent Charles Bean, was determined that it should at least try to help people understand the experiences of those who put themselves in harm’s way in their country’s service.

At the heart of the Memorial is the domed chapel known as the Hall of Memory which contains the Tomb of the Un­known Soldier, while outside is a memorial pool surround­ing an eternal flame. The names of the 100,000-plus Australian servicemen and women who have been killed in the conflict are listed on a series of bronze plaques in a Roll of Honour. No ranks are indicated as “all men are equal in death”.

The west wing of the two-story building’s upper floor focuses on the First World War, while the east wing concentrates on the Second World War. Between the two wings, the Hall of Valour rec­ognises the extreme courage of Australia’s 96 Victoria Cross recipients. Large items of military hard­ware, including a number of historic aircraft, can be viewed at ANZAC Hall.

The Memorial’s lower level is where the displays from conflicts before and after the two world wars are housed, and where visitors can find research facilities. The Memorial’s stated pur­pose is to commemorate the sacrifice of those Australians who have died in the war. Its self-proclaimed mission is to assist Australians to remem­ber, interpret and understand the Australian experience of war and its enduring impact on Australian society. This it accomplishes in some style.

Visitors will want to set aside at least a full day to appreciate what this moving Memorial has to offer and to appreciate the incredible sacrifices of the heroes who inspired it.

Canberra has an abundance of great places to stay, so why not head over and take a visit to the memorial.