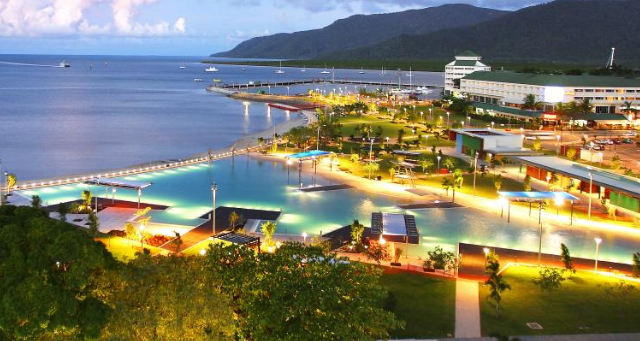 Cairns is the capital of Queensland’s tropical north and, with a population of some 150,000, is the 14th largest city in Australia.

Cairns is a great base from which to launch out to explore other places such as Port Douglas, the Daintree Rainforest, Mission Beach, and even Cape York, and Gulf Savannah. It all means that many grey nomads seize the chance to catch their breath while they are here … to stock up on food, fuel and equipment and to make sure that their vehicles and indeed their health are in perfect nick for the adventures ahead.
It would be wrong though to define Cairns as a mere stepping stone. This is a fun, vibrant and well-serviced city in its own right … and it has much to offer grey nomads.

The palm-tree-lined Esplanade lies at the city’s heart. From here you can look over beautiful Trinity Inlet, and see the birds feeding on the mudflats The place has a buzz about it and hordes of people descend on the area in both the day and the night to enjoy the multitude of eateries, shops, hostels and quirky attractions.

The Esplanade Markets which are held every Saturday between 8am and 4pm are another popular attraction for visitors. Cairns is very much a market-friendly city. Indeed, the famous Night Markets have evolved from a temporary open-air market into a permanent air-conditioned centre at the base of the Royal Harbour Hotel boasting 130 stalls and a 200-seat food court with 13 food outlets.Cairns may not be an old city but it still boasts a true sense of history. Nestled among the many new and modern buildings, you will find wonderful evidence of colonial architecture such as the old Cairns Court House which in now the Cairns Regional Art Gallery, and the Cairns Museum. Incidentally – independent of architectural magnificence – the museum and the art gallery are both well worth a visit.

Cairns is though primarily a wonderful blend of old and the new. And modern structures like the Reef Hotel Casino have got an incredible ability to surprise and delight. On the building’s rooftop is the Cairns Rainforest Dome, a spectacular all-weather wildlife exhibit. Approximately 60 species of animals are able to wander and fly freely throughout the 20-metre high glass enclosure that replicates their natural environment. Amazing stuff.

However hard man may try though, in a place like Cairns nature itself is always going to be the biggest attraction. The Cairns Beaches, which are known locally as the Northern Beaches, encompass several well-known stretches of sand including Machan’s Beach, Holloways Beach, Yorkey’s Knob, Trinity Beach and Palm Cove Beach.

Over the years, Palm Cove Beach and Trinity Beach, have developed into major tourist destinations boasting five-star resorts and luxury accommodation. In this tropical paradise, times they are always changing.

A reminder for you swimmers that stinger season runs from November to May, and if you find yourself here at this time of the year make sure you take a dip within the enclosures and between the lifeguard flags.

There are of course numerous other top camping spots littering the Cairns surrounds and whether you are after the facilities and comfort of a van park or the beauty and serenity of the wilderness you can find both easily here. This is a city and a region where you can linger, enjoy and … stay warm. Cairns is what the lifestyle is all about.

This is, of course, the ideal place from which to explore the wonders of the Great Barrier Reef, one of the highlights of many a Big Lap. Indeed, more than 2,000 passengers depart Cairns’ new Reef Fleet Terminal every day to enjoy the thousands of colourful tropical fish and coral on the Great Barrier Reef and islands. Whether you are a diver, a snorkeler, or a reformed daredevil who doesn’t like to get wet any more, there is no excuse for you not to get out to see the magic of the reef. There are numerous companies offering a variety of ways to check it all out, including the popular glass bottom boat method. The reef is truly a wonder of the world and an experience that should not be missed.

The Atherton Tablelands, which ranges from 600m to 1100m above sea level, is an area that simply has to be visited. Lying an hour or so west of Cairns, this is the major agricultural area of the region and is home to a number of scenic and character-filled towns and villages such as Kuranda, Mareeba, Chillagoe, Ravenshoe and Atherton.
Lake Tinaroo, which has more than 200 kilometres of shoreline, is the largest lake in the area and is a popular spot for fishing and watersports. Those who don’t mind a bit of a cool dip can also swim in Lake Barrine or Lake Eacham, both crater lakes which were originally created by volcanoes.

Get on a boat to go view the Great Barrier Reef; visit the Esplanade Markets; embark on a fascinating journey of discovery over and through the oldest continually surviving tropical rainforest on earth with Skyrail Rainforest Cableway. Consistently voted as one of the best things to do in Cairns, the Skyrail experience offers a truly unique perspective of Australia’s World Heritage listed Tropical Rainforest as you glide just metres above the pristine rainforest canopy before descending to explore the forest floor at the Red Peak and Barron Falls Rainforest Stations; admire the colonial architecture of buildings such as the old Cairns Court House (now the Cairns Regional Art Gallery) and the Cairns museum; experience authentic Aboriginal culture through exhibits and performances at the Tjapukai Aboriginal Culture Camp.

As you would expect from such a bustling tourist centre, there are no shortage is caravan parks offering a range of comfort levels and services to visiting grey nomads. Even veteran free campers tend to relent and spend a night or two in a park to catch up on their laundry, recharge their batteries, and to make use of the services available, when they are in town.

Not that there isn’t some great camping to be enjoyed not too far out of Cairns itself as well. The Speewah campground in the Speewah Conservation Park is a perfect base for exploring the various walking tracks of nearby Barron Gorge National Park. It’s a peaceful and scenic spot in an open grassy area among rainforest trees and it can be accessed by conventional vehicles and trailers. The lower section of Barron Gorge National Park is just 18 kilometres north-west of the city while the upper section a further nine kilometres out.

Danbulla State Forest which is on the Atherton Tablelands about 1.5 hours away from Cairns offers lakeside camping at one of the five camping areas along the 28 kilometre Danbulla Road. Great features of the area include crater lakes, strangler figs, rainforest walks and places of important local history and interest.