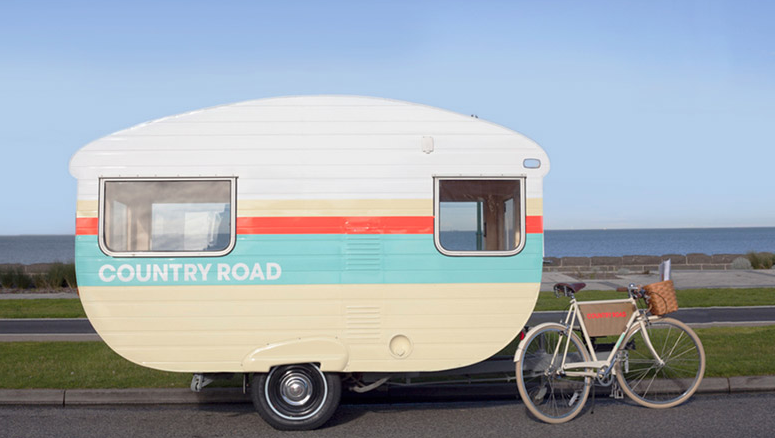 A discussion with Max on building his own rig or camper trailer. “We had a small Coaster for 3½ years and that experience gave us very specific ideas of the layout and inclusions we wanted our new motorhome to have,” explained Max.

The couple calculated that by the time they made all their proposed changes to a standard factory model they would be looking at a real budget blowout. They decided the best, and cheapest, an option would be to buy a second-hand bus and fit it out themselves. Their first challenge was to find a suitable vehicle. “We’ve seen lots of converted buses on the road that still look like buses. We really wanted ours to have a more modern appearance,” Max said.

After a statewide search, Max and Carol were thrilled to find a second-hand vehicle advertised in the trading post only ½ hour away from their home. The 1980 bus, measured 11½ metres and had already had a lot of bodywork done to it by previous owners Ian and Leann. “We were so lucky to find the vehicle,” admitted Max. “the exterior had already been done and we were happy with it. We just needed to fit out the inside and wire it up – we thought we were at least halfway there.”

Although they pretty much kept within their budget, the six-month project was not all plain sailing. They found it difficult to find tradesmen. They also ran into a couple of unexpected problems.

“The process has been at once interesting, challenging and certainly time consuming,” said Max. “We didn’t have a big budget but for the most part, we were able to stay within it. Having said that, there were things that cropped up that we hadn’t counted on. For example, we thought that the existing roof lining in the vehicle would be sufficient but it turned out that it wasn’t, so we had to get an upholsterer in to put a new lining on the roof and on some of the walls.

“We also initially wanted to have floating timber floors but were told it wasn’t a suitable floor covering because the vehicle would be moving all the time. We opted instead for a thick vinyl but then discovered we needed to have a special underlay – so we went slightly over budget on the floors, too.”

When the project was nearly finished, the couple was ready to get the rego organized so they could take their maiden voyage to a rally in Barcaldine. They hit another snag when Queensland Transport officials told Max that their search revealed that the vehicle had been stolen.

“I was completely shocked by this and asked them what sort of vehicle they had listed as being stolen,” said Max. “When they said they didn’t have those details I knew it must have been a mistake. If a 36-foot bus had been stolen it certainly would have been in some paperwork somewhere. The problem was that we didn’t have a VIN number, just a chassis number. We finally got it sorted out but by then we had missed the Barcaldine trip.”

Once the vehicle was finally ready to hit the road the couple was thrilled with the results. “We love the space and comfort it gives us,” Max says. “Our fitter did an absolutely top job on it. I have to admit I was a little bit nervous about driving it at first, but now that I’m used to it I feel completely comfortable.

“Having a large vehicle is very different – but it has opened up a whole new world for me. Because of its size, we can’t just dive into a local garage to have a minor issue looked at – it’s likely it wouldn’t even get into the building. But I’ve met a whole group of new people who have worked on or are interested in larger vehicles. It’s been great.”