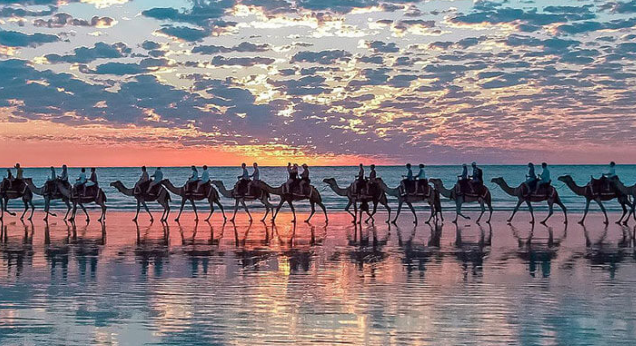 Broome. Just the very name is enough to send the heart racing. Broome is the holy grail of the Big Lap. It’s no exaggeration to say that this city, situated on the turquoise waters of the Indian Ocean is a grey nomad legend.

Originally founded in the 1880s as a pearling port, Broome has grown and changed but – for most visitors – it still retains a magical something. The riches that pearling promised resulted in a rich and vibrant multicultural population … and today’s tourists, led by heat-seeking grey nomads, have added another element. What’s the big attraction? The wondrous beauty of Cable Beach, the winter warmth, the camaraderie of the van parks and camping areas, the Staircase to the Moon, the sheer adventure … and, one more time, the winter warmth!

Some grey nomads now claim the place is overly commercialized, too busy but, for most, it is simply the ultimate place to spend the cooler winter months. Ah yes, the climate. Well if you time it right, it’s close to unbeatable. Once you’ve spent time in Broome in June, July or August you won’t ever want to spend another day of those months anywhere near Perth, Melbourne, Sydney or even Brisbane.

Nowadays, with Broome’s popularity reaching epidemic proportions and crowding becoming a problem the tourism authorities are desperately trying to lengthen the season. They have a point. The weather in May is magnificent and even in September – although it’s warming up a bit – it is extremely pleasant so why are the bursting-at-the-seams-in-the-season parks suddenly half full?

The town itself is attractive, if unspectacular, and boasts all of the goods and services you would expect from a tourist town of its size. The pearling history of the area is quite fascinating and there are a number of venues where you can learn more. There are also several caravan parks with the large Cable Beach Caravan Park being the one closest to the mythical Cable Beach. Be warned though, if you are visiting Broome in peak season, it most definitely pays to book well ahead. As the ‘pearl of the North’s’ popularity grows, there is a risk that the drive-in market that really put Broome on the map in the first place may be elbowed aside in the town’s desire to cater to the ‘more spendthrift’ fly-in market. It would be a shame if that were allowed to happen.

It’s an exotic destination and the glorious sands and turquoise waters of the Indian Ocean are impossibly beautiful. For those who like to get their toes wet, you’ll be pleased to note that crocodiles are not reported to visit Broome waters … although it is still possible. Of more immediate concern to most visitors is the threat of box jellyfish that increases as the weather warms up.

While a debate over the whys and wherefores of whether it is a suitable place to build a massive gas hub that would change the area forcer, the Dampier Peninsula north of Broome remains a magnificent destination. At least for now, the ridiculously beautiful beaches are largely unspoiled and there are some superb camping and fishing spots along the coastline. The 200-kilometer road all the way up to Cape Leveque is still dirt and is sandy in parts. You’ll need to leave the van in town and put the tent in the 4WD. It’s well worth the effort! A number of friendly Aboriginal communities are along the way. Among them is Beagle Bay, famed for its historic church which was built during the First World War. However, in this part of the world, Mother Nature is the star attraction. Kooljaman at Cape Leveque is a unique wilderness-style luxury camp on the very tip of the peninsula. If you’re looking for a place that’s so special you don’t mind busting the budget a little, this could be the spot. The scenery is spectacular, the sunsets are remarkable and, if you’re in the mood to get out of your chair, you can take a bush tucker tour, enjoy amazing walks, have a fish or go birdwatching.

Cuddle someone special as you watch the sunset over Cable Beach; learn about the peal industry; catch a movie at Sun Pictures, the world’s oldest operating outdoor cinema; witness the Staircase to the Moon phenomenon (2-3 days per month from March to October); see the ancient dinosaur footprints at Gantheaume Point; see the shorebird invasion at Roebuck Bay; drop the van and take a drive up to Cape Leveque; book ahead for next year!

There are a number of caravan parks in Broome but in season, it’s not so much which is the best one as which one has a spare spot. Overflow camping is available at a number of locations during peak season including the PCYC, the pistol club, the speedway club, and the Seventh Day Adventist Church – but even these can get full. Note that free camping is certainly not welcomed by the Broome powers-that-be and offenders will be moved on. Heading north you can find free camping spots at Willie Point, Barred Creek, Quondong Point and James Price Point but this could change if plans for building the new super gas hub on the Dampier Peninsula move forward. Staying in Broome … plan ahead!