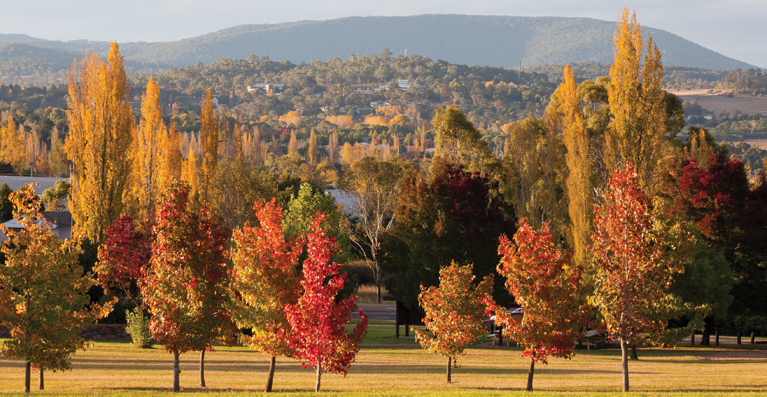 Situated on the junction of the New England Highway and the fabled Waterfall Way, the majestic town of Armidale is a natural and welcoming stopping point with some great places to stay.

Armidale sits on a lush plateau, 1000 metres above sea level, and is famous for having four very distinct seasons and a dazzling array of ‘autumn colours’. Sitting on the banks of Dumaresq Creek, the town of some 25,000 residents is also famed for its superb heritage buildings.

Although it was initially marked out as grazing country, the discovery of gold, minerals and tin nearby meant Armidale’s population boomed in the late 19th century. The majesty of the Anglican and Catholic cathedrals that were built at the time, along with other notable historic buildings – such as the post ofﬁce, state bank and courthouse – all reflect the wealth and optimism of those early days.

The town is home to the University of New England, and four prestigious and expensive private schools, as well as a wide array of public schools. There is a lot to take in and the free Armidale Heritage Tour bus an excellent way to get an informative, and entertaining, insight into the town’s history, heritage and highlights.

It’s a beautiful city to stroll around and there is no shortage of shops, cafes, galleries … and caravan parks. As a town, Armidale has got a lot going for it, but the area in which it sits is equally attractive. There are four amazing national parks within an hour’s drive; Cathedral Rock National Park is famed for its giant granite boulders; Guy Fawkes River National Park is home to Ebor Falls and several other spectacular waterfalls; Oxley Wild Rivers National Parks boasts gorges, falls and pristine waterways; and New England National Park has stunning lookouts, hikes, and rainforest.

Among the many highlights is the nearby village of Uralla, which was once home to notorious bushranger, Fred Ward, aka Captain Thunderbolt. Most people will love McCrossin’s Mill Museum which has a collection of Thunderbolt memorabilia and displays from the area’s gold mining heyday.

The historic Saumarez Homestead also offers a glimpse into yesteryear. The Edwardian mansion, built between 1888 and 1906, still has most of its original furnishings intact. With annual events including the likes of the Autumn Festival and the New England Wool Expo, there is also something going on here. Although the winters can be cold and light snow not unknown, any time is a good time to visit this grandest of Australian country towns.